This article was originally published in the Spring 2015 JSC “Space Center Roundup”, the official publication of the NASA Johnson Space Center. It was written by Norm Knight, current Chief of the Flight Director Office.

The PDF of the article is available here for download, and the text/images are reproduced below for your enjoyment.

AS WE APPROACH the golden anniversary of the Mission Control Center (MCC) in June, we take time to reflect on the significant impact this facility and the people involved have had on human spaceflight.

A fully staffed Mission Control Center during the first mission to use it — Gemini IV on June 3, 1965.

Johnson Space Center’s MCC began real-time operations with Gemini 4 on June 3, 1965. These Mission Operation Control Rooms (MOCRs), which were a piece of the overall MCC, had traditional government-color-schemed consoles complete with black-and-white displays, color indicator lights, communication panels with an ever-flashing matrix of buttons, tabletop workspaces with headset jacks, and were state of the art and standard issue to the Flight Control teams who brought this technology to life and made some of the greatest achievements in human history that many thought to be impossible.

These original MOCRs supported nine Gemini missions, 11 Apollo missions (including the historic Apollo 11 moon landing and Apollo 13), the first U.S. space station Skylab, Apollo/Soyuz and and 76 Space Shuttle Program missions. Visitors recognize the third-floor MOCR as the historic Apollo Mission Control Center, which is a National Historic Landmark preserved for future generations to reflect on and learn from.

Spacecraft communicators are pictured as they keep in contact with the Apollo 11 astronauts during their lunar landing mission on July 20, 1969. From left to right are astronauts Charles M. Duke Jr., James A. Lovell Jr. and Fred W. Haise Jr.

During this time, the MCC changed slightly to support these new programs. However, the most significant change occurred when the teams transitioned into the “digital age” with a new wing to the building and the addition of the Red/White/Blue Flight Control Rooms (FCRs). These were used for the remaining space shuttle missions, the first half of International Space Station assembly and, most recently, Orion’s first flight test, Exploration Flight Test-1.

Both past and present met once again when the second-floor MOCR was remodeled and upgraded as FCR-1 to house the teams that completed space station assembly and continue to support 24/7 station operations.

The teams that work in this facility are the lifeblood of the command and control operation, where the planning and training transition into real-time mission execution.

The combination of the facility and the culture of the people working within result in what many say is a “laboratory of leadership,” where the foundations of flight operations were forged and continue to be honed (discipline, competence, confidence, responsibility, toughness, teamwork and vigilance).

Where impossible scenarios are actively wrestled into manageable elements with an “improvise and overcome” critical-thinking mental attitude, and where “failure is not an option.” 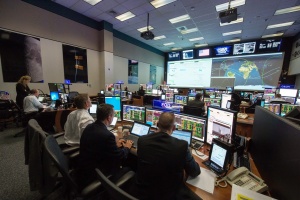 Orion’s first test flght was completed in an FCR equipped with the latest technology of this digital age.

Where success is celebrated, but focus remains on where we can improve.

Where our shortfalls are recognized and responsibility is taken to never allow them to repeat.

Where men/women enter the ranks as apprentices and grow into seasoned leaders for our agency and country.

The plaques on the walls in these FCRs are a testament to the many successful missions and the teams that made them a success.

As we celebrate 50 years and see the reflection of what the MCC has accomplished, this provides reassurance that the future of human spaceflight is in great hands as we evolve from missions that were yesterday’s dream to missions that will become tomorrow’s reality.