Day 1b: Pubs and Palaces

So… after an exhausting morning, lunch is in order!

We head, on a referral, to The Albert Pub for lunch! It was fantastic, and the kids got a taste of not only pub food, but Strongbow (cider) on tap! Since they were with us, we let them each “enjoy” one pint per day of their choosing.

At the bottom of my pint of ale, I had a “congratulatory message”.

Spot on! Wow. Thanks!

Lunch was really yummy, and after finishing everything, we were ready to move on.

Just up the street was Buckingham Palace. The flag was up, so the Queen was home! Sorry for the slightly dark picture… the sun angle was wrong for a really good one…

We hopped aboard a double-decker tour bus for a zip around the City, seeing the sights and enjoying the wonderful afternoon weather. One of the sights I hadn’t seen before was the *original* Hard Rock Cafe:

After the bus ride, we had a boat ride down the Thames towards Tower Bridge and the Tower of London planned, so we climbed aboard and had a nice relaxing ride along the river, past the London Eye (again), Cleopatra’s Needle (see below), St. Paul’s, and other sights until we approached the famous Tower Bridge. 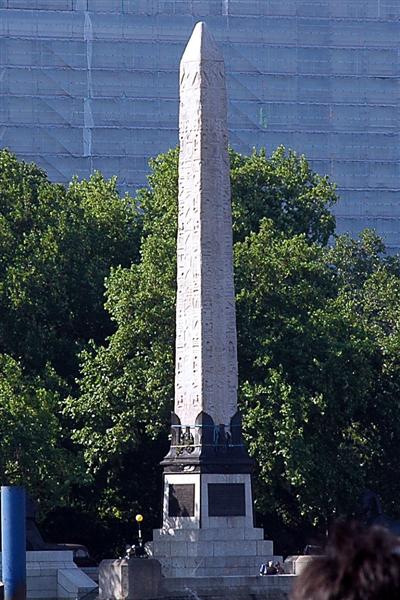 Unfortunately, the Tower of London closed at 6pm, with the last tickets sold at 5pm… since we had arrived at 5:30pm, we decided to make it the *first* stop of tomorrow’s adventures!!!

On the way out, we saw part of an original Roman wall around Londinium (as it was called):