An Afternoon in Veurne

In the summer of 2001, during yet another visit to England, we got to visit a small village in Belgium that is definitely “off the beaten path”. I’ve written a *little* about our visit to Veurne that day, but it really deserves more than just a few quick sentences to do it justice.

Here are all of my photos from Veurne (and Dunkirk, too!)

After a brief visit to Dunkirk, we decided that Belgium was just “too close” to not also tick it off our travel destination list.

As part of the larger European Union, crossing the border from France into Belgium was nothing other than a road sign noting the event.

Driving along side freshly plowed fields, the relatively flat coastal features of northern Belgium weren’t providing any real reward for having made the detour… until… we spot a large church spire in the distance.

Given my love of small English and European villages and churches, it’s an easy choice to divert from the highway where there’s nothing showing on the visible horizon other than a straight road and more plowed fields.

Don’t get me wrong – it’s lovely – but we have a limited amount of time before we’re supposed to be back at Calais to take the Channel Tunnel train back to England!

Crossing the narrow canal that circles most of the town, we make our way towards that tall spire.

A large central market square with plenty of ample parking welcomes us to get out and enjoy Veurne, so we gladly accept!

A large “public pump” still exists in the middle of the spacious market square. It still has flowing water, as a decorative fountain structure now, but in earlier days would have been a source of easily attainable fresh water for the village citizens.

There are lots of things to do, but so little time!

Kathy, Julian, and Jenny decide to hit a few of the very colorful shops in the buildings that surround the market square, but (as always) the central church draws me to it.

The church itself was not accessible, unfortunately, but that doesn’t prevent me from exploring around it. It’s a real shame, too, as doing some image searches for this church produces absolutely beautiful images from inside that I wasn’t able to see.

But, that’s somewhat the point of my writing these blog posts about the out-of-the-way places I’ve visited, isn’t it? If you’re able, get outside the normal touristy places and see everything you can in these smaller villages. You’ll never be disappointed.

Walking around St. Walburga takes me to a beautiful little wooded park behind the cathedral itself, complete with a charming bandstand that I can only imagine hosting regular mini-concerts, filling the park with music and laughter. Again, this is a sight that tourists who may have even accidentally stumbled upon Veurne would not have normally seen.

Get out. Walk. Explore.

Hey – as an American, if there are two things that Belgium is known for, it’s chocolate and beer, right? So, leaving the peaceful little park behind, I catch up with my party as we walk down Ooststraat (“East Street”) in search of some Belgian goodies. 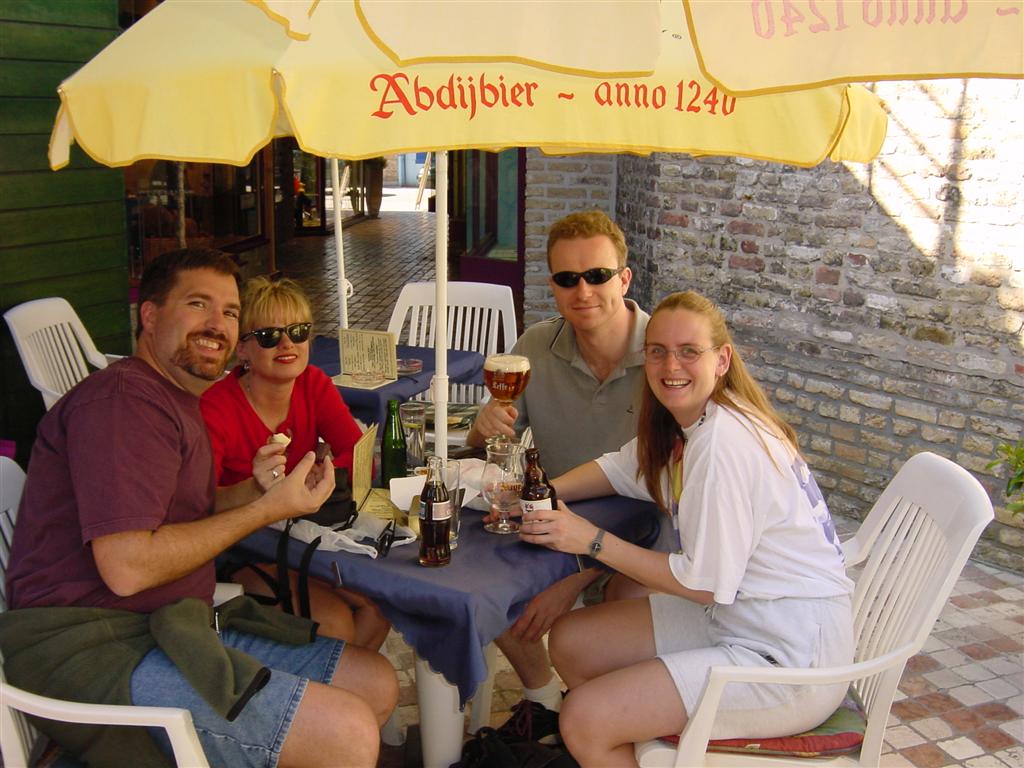 As luck would have it, a lovely chocolate shop is placed there – almost as if it were waiting for us! It’s small enough for only a few people at a time, and since there was someone (seemingly local) making her purchase, we decided to be as unobtrusive and quiet as possible until they were done. Speaking English among ourselves, rather than the local Dutch or French, we would have definitely stood out as visitors, had our general appearance and my ever-present camera not given us away (ha).

But, as her previous customer departed and we excitedly (and a little more vocally) started looking over the selection, the store owner lit up when she realized we were English speakers! Asking us where we were from prompted a great conversation, as she had spent some time in Chicago.

While we were talking, and pointing at a few samples we were considering, she graciously started filling a box with a huge selection of lovely treats. At the end, she charged us what we thought was a mere fraction of what they chocolates would probably actually be worth.

I rack this up to being such polite visitors and giving her a chance to practice her (very good) English again.

This was far easier to find!

Before this, I had not really had an authentic Belgian beer. Leffe, brewed first in 1240, is a very traditional example.

The Leffe line has several distinctive types, like many other brewers, but we enjoyed a very light beer that was perfect with both the sunny afternoon and our recently-acquired chocolates. 🙂

Sitting outside on a perfect day, in a little Belgian cafe, in a small Belgian village, with fresh Belgian beer and chocolates? Yes please!

While the girls hit another shop (or three) that they hadn’t browsed yet, Julian and I walked about town a bit more. We found an alleyway entrance with an ornate arched entry. Sitting in the archway was a soccer ball. Being British, he couldn’t help himself and booted the ball up towards its companion just up the old cobbled alley.

That’s when it got weird.

He wasn’t trying to put any backspin or anything on the ball … and there wasn’t a noticeable slope to the alley … but the ball came back on its own, rolling to a stop very near to where it started.

I’m sure it was just a slight slope down from the alley and a rise up where the archway was located, but still… ooooooo! 🙂

After this, there really wasn’t much that we could do to top our brief encounter, so it was time to head back across the English Channel … but now, Veurne will be forever a cherished memory embedded in a memorable vacation.

If you’re ever in the neighborhood, drop in.

Enjoy some treats and take in this charming little Belgian town.