Situated atop the second-highest point in the Cotswolds, Broadway Tower is easily visible from many points in the beautiful surrounding English countryside.

It was built in the last few years of the 18th Century (completed in 1799) as a gift for Lady Coventry from her husband, George William 6th Earl of Coventry. She had wondered whether a beacon fire lit on this spot would be seen from her house in Worcester – some 20+ miles away.

So, being a dutiful husband and having plenty of resources at his disposal, he set out to grant his lovely wife’s request!

(Spoiler Alert: It could be seen!)

My first experience with Broadway Tower was in November of 1996. Driving with John and Marianne on a sunny (but COLD) English afternoon, we had been through the village of Broadway for some shopping and had been touring the surrounding Cotswolds villages. 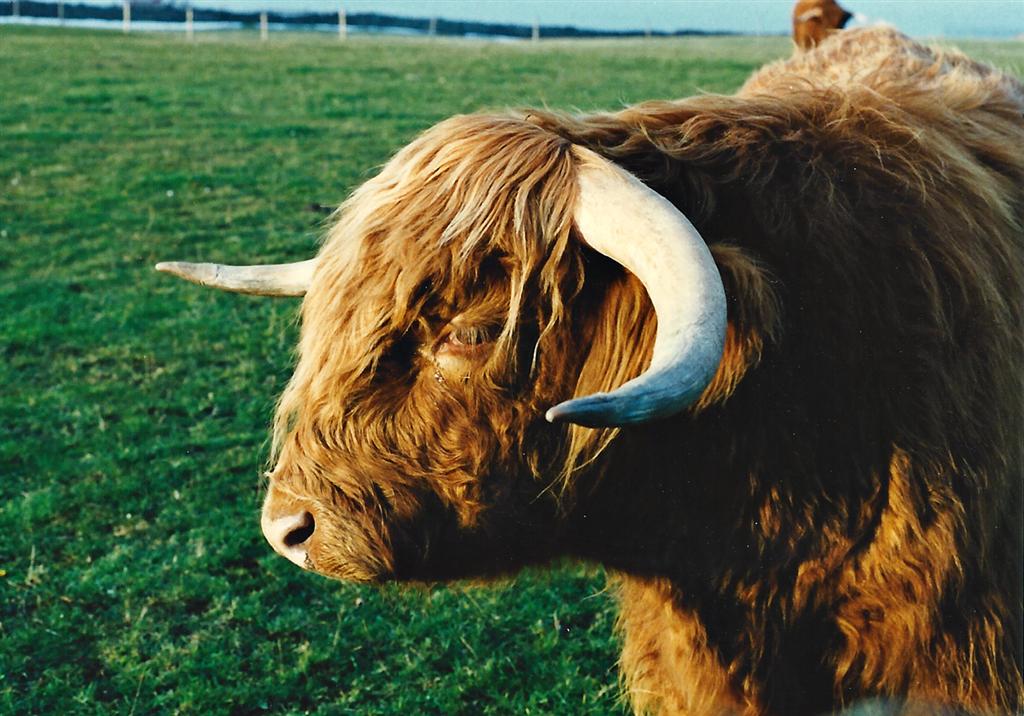 Pulling out of Broadway and onto the A44, I spotted a very striking silhouette on the crest of the rising hill overlooking Broadway.

John obliged my curiosity and drove us to it, but given the time we had for other things that day and the quickly setting sun, we didn’t actually get to explore it.

Shockingly, I don’t have any photos of the actual Tower from *this* visit, because we were greeted at the fenceline by two of the shaggiest cows I’d ever seen. After the fact, I found out these were Highland Cattle, a native Scottish cattle breed that have made their way down to the Midlands of England.

As they shuffled up to the fence line, we were able to pet their muzzles for a few minutes before moving on to the next event.

Seeing the Tower across the field, though, only whet my appetite to return for a real exploration.

A *much* longer visit in 2001 was in store, as it was a perfect June afternoon and the blue skies were absolutely perfect for the views we encountered. Julian, Jenny, and I were introducing Kathy to the Cotswolds – but we made a special point to stop in at Broadway Tower Park.

My two Highland Cattle buddies were still here, providing a perfect photo opportunity with the Tower in the background.

In 2001, the UK was suffering through an outbreak of “Foot and Mouth Disease” … more commonly referred to as “Mad Cow Disease”. Some of the ubiquitous Cotswolds sheep around the Tower Park were protected with a very official-looking sign.

None of the sheep looked mad about the added privacy. 😉

At the (unfortunately closed, because we could’ve used a cool drink!) Cafe, there was a play area for the kids and a perfect photo-opportunity reproduction of medieval stocks. Of course Kathy, Julian, and I had our pictures taken it them.

I don’t know how Jenny avoided her turn. Hmmm.

Enough oddly-amusing historical bondage … it’s time to move onto the star of the show – The Broadway Tower and the commanding views from the top!

As we approach the Tower, it’s both larger and smaller than I thought… if that’s an allowed contradiction of terms. When you first see it, atop the hill from a distance, you expect it to be this “massive structure”… and, indeed, when you first stand next to it, it’s at least five modern stories tall – with the actual height, including the turrets, reaching to almost 65 feet high. But still … it’s just this little castle tower, atop a hill, all by itself. It’s almost Monty-Python-silly, but that’s for another visit. 😉

Entering through a single arched door at the base of the Tower, several of the interior levels are set in a museum recreation of regional life in the 1800s. Narrow stairs also provide round stone window views of the Cotswolds as you climb to the observation deck at the top of the Tower.

This is where the best views, as expected, of the Cotswolds can be had. It was a beautifully sunny, but VERY breezy afternoon, so those of us with long hair (read: “neither Julian nor me”) had problems keeping things from getting out of hand. Heh.

The beautiful green rolling hills of the Cotswolds can be enjoyed from every direction. Looking down towards the village of Broadway, we talked about our post-Tower plans – which included a nice afternoon tea, complete with scones, clotted cream, and jam!

Bidding Broadway Tower adieu for this visit, I knew that I’d be back again — as this is such a fun and iconic taste of England that most people never get to visit!

In 2006, we brought Andrew and Melanie to England … and to the Tower!

In addition to our kids, Julian and Jenny have their first son, Sam, with them – so being able to spend a little time playing around at the Country Park is a welcome diversion for a bit. The swings under the trees, laughing, and just spending time together made this another great day on what ended up being a perfect vacation for us.

But with the appeal of the Tower so close, we head across the short walk towards our destination!

If it’s possible, today’s weather was even more spectacular than it was when we visited in 2001! The blue skies, perfect temperatures, and a MUCH reduced breeze could not have been scripted any better.

Photographic as ever, the afternoon lighting really made the traditional Cotswold Stone exterior glow with that soft yellowish limestone color that I’ve come to love so much. Since we have a bit more time today than on the previous visits, I make a point of circling the base of the Tower.

Looking up at the turrets and balconies does give an impressive view, and makes me wonder if Lady Coventry was, indeed, satisfied with her husband’s efforts to answer her question.

I would hope so … it’s really very imposing on the hillside.

Climbing up the interior spiral staircase, Andrew, Melanie, and I arrive at the top of the Tower and take in the stunning Cotswolds views. Today’s haze kept the longest views from us, but from past experience, if the air is clear, you can see all the way to Wales from this vantage point.

I could *just* see the Malvern Hills – aka the “Hills of Doom ™!” from our previous day’s hike! I’ll write about those in another journal. 🙂

As he stands below us, Julian and I have an obligatory conversation about looking for a holy drinking relic, my having one already, and requesting that he leave before I impose my stinging repartee on him again.

While the “Mad Sheep” aren’t nearby, there are a number of the local red deer that live on the premises. They, and the Highland Cattle, are almost as much of a comforting presence as being at the Tower itself.

Back at the park, there’s a great log on which to climb. Of course everyone plays on it. Natural toys are, sometimes, the best toys.

Oh – and, while I’ve not actually been down in it, there is a decommissioned Nuclear Bunker at the Tower site. Built during the Cold War, it was used to monitor and report the effects of nuclear explosions/tests. Closed in 1991, it’s been restored now as a (quite compact looking) historic relic that can be seen by climbing down the ladder at the very small-looking surface access point.

Although rainy English afternoon weather kept us from actually getting *to* the Tower with LeAnn, we did enjoy a nice snack at the cafe and definitely got to see the Tower during a break in the rain.

As with all of the other “uncommon places” that I’ve been writing about, getting away from the expected and usual tourist destinations will result in some of your best memories.

GET OUT AND SEE THE UNUSUAL!