For those of us who have been intimately involved with Manned Spaceflight or if you have been interested and valued supporters from outside the program, the week from January 27 – February 1 is a particularly somber time of the year. NASA has identified a single day, this year (2018) on January 25th, as their “Day of Remembrance” to honor all three events that simultaneously shocked and shaped Manned Spaceflight, the nation, and indeed – the world.

During a pre-launch Pad test, the crew of Apollo 1 were checking full-up spacecraft systems and operational procedures in anticipation of the first manned launch of the new Saturn flight vehicle that would, eventually, take men to the Moon. Due to a number of reasons, including a pressurized pure oxygen environment in the Command Module, wires that were stripped bare due to excessive wear and contact, and an unfortunate spark, turned a combustible environment into a deadly inferno. The crew of three, Gus Grissom, Ed White, and Roger Chaffee, died on the pad.

After reviews, investigations, and honest evaluations by everyone involved from NASA to each individual Contractor, they identified the root causes of the fire. Many improvements were made to the flight vehicle, and a renewed commitment to quality and performance led to ultimately meeting President Kennedy’s goal of “putting a man on the Moon by the end of the decade.”

On a personal note, January 27th is also my birthday. Even though I was very very young and do not have direct memories of Apollo 1, the success that my predecessors at NASA had in landing Apollo 11 on the Moon in 1969 directly led to my career at NASA as a Flight Dynamics Officer in the Space Shuttle Mission Control Center.

You can read more about the Apollo 1 Tragedy here: https://www.nasa.gov/mission_pages/apollo/missions/apollo1.html

Substantially cold weather led a previously-seen design flaw turn to a catastrophic failure, as a field joint in the segmented Solid Rocket Booster (SRB) failed shortly after launch. Approximately 72 seconds into the flight, this failed joint had allowed an unconstrained flame to escape enough to where the External Tank (ET) had been compromised, allowing both the escape of liquid hydrogen and the SRB to rotate into the top of the ET, causing the catastrophic destruction of the launch vehicle. All seven of the Challenger crew, CDR Dick Scobee, PLT Mike Smith, Mission Specialists Ellison Onizuka, Ron McNair, and Judy Resnik, and Payload Specialists Greg Jarvis and Christa McAuliffe, died as a result, when their separated crew cabin hit the ocean after the conflagration that allowed aerodynamic forces to rip Challenger apart.

The Challenger Accident was another direct impact on me. I’ve written about that morning before (“Remember”) and how it turned the euphoria of moving from my University experience into what I had been planning for as my lifelong career since that moment in 1969 that so deeply affected my younger self. Being a part of the NASA family, as we rebuilt the program from the ground up, and returned to Flight, shaped my personality – both privately and professionally.

A friend of mine created a direct tribute to the Challenger crew that he graciously allowed me to host as well — “Icarus Rising” is a powerful remembrance of the STS-51L crew.

Even after all these years, the “Lessons from Challenger“ also still affect my life.

You can read more about the Challenger Accident here: https://www.nasa.gov/mission_pages/shuttle/shuttlemissions/archives/sts-51L.html

Footnote: NASA and the Challenger Center will collaborate to conduct several legacy lessons designed by Christa McAuliffe for the space shuttle Teacher in Space Mission later this year aboard the International Space Station.  Read about it here. 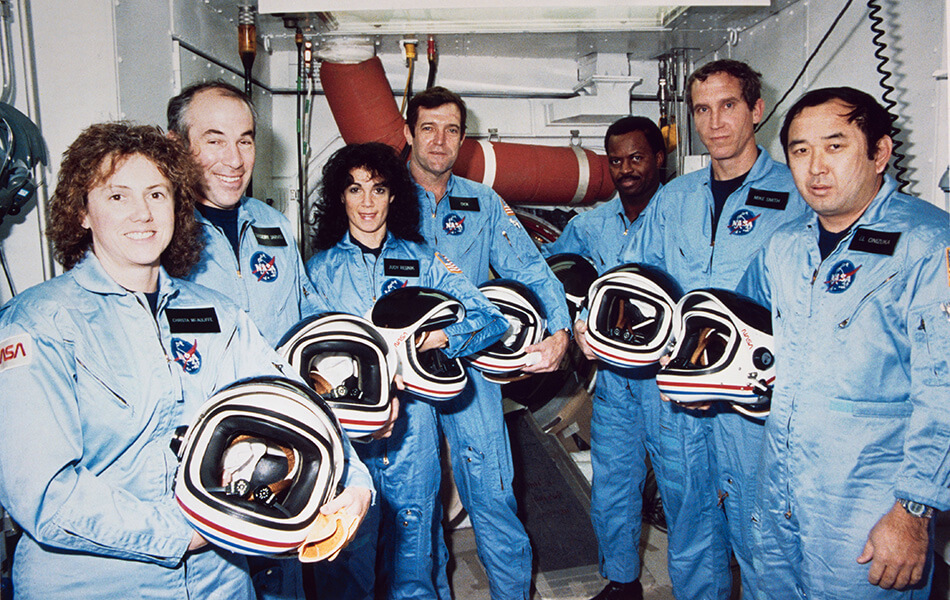 A random piece of thermal protection foam from the External Tank came loose during launch and struck the leading edge of Columbia‘s left wing. While this was seen and investigated immediately after launch, there was no easy way for the crew to see that affected segment of the Orbiter’s wing. Decisions were made to return nominally, even though there had been no way to conclusively determine the actual state of the reinforced carbon-carbon segment of the leading edge. As Columbia transitioned into different flight regimes during entry, the super-hot plasma formed during every nominal entry found its way into the wing structure, resulting in the complete loss of the Orbiter. All seven of the Columbia crew, CDR Rick Husband, PLT Willie McCool, and Mission Specialists David Brown, Laurel Clark, Michael Anderson, Ilan Ramon, and Kalpana Chawla, died over northern Texas as the extreme forces essentially disintegrated Columbia approximately 15 minutes from a planned KSC landing.

Even though I had left NASA a few years earlier, the effect was every bit as strong as when I was there for Challenger, as I knew almost all of the Mission Control operators who had been working that morning.

Their pain was my pain. Their loss was my loss. I grieved with them and exchanged emails.

For many of them who had not been around for Challenger, this was the seminal moment of their careers that would shape them forever. And, as I knew they would, the Program was restored to flight status, and they finished the construction of the International Space Station and saw the Space Shuttle Program through to its dignified conclusion.

You can read more about the Columbia Loss here: https://www.nasa.gov/columbia/home/index.html

A friend of mine from NASA wrote this tribute, “We Came Here You and I”, that I’ve hosted since 2003, that really puts an emotional punch to these three events that happened in and around the same time of the year. I highly recommend that you read it.

It is during this time of the year that really makes me pause, even though I’m no longer a direct part of the Manned Spaceflight Program, and not only remember the sacrifices and loss of years past, but also to rededicate personal and professional efforts to never be complacent — especially when actions may have “ultimate consequences”.

…and so, I pause to remember.